A downloadable game for Windows

Zephyr is a first person speedrunning platformer.  In the game the player is tasked with traversing floating islands and avoiding dangerous traps in order to find artefact pieces in as fast a time as possible.

The player has two unique abilities to help accomplish this, a short blink that dashes the player a few feet in the direction they are looking and a long range aimed teleport that can instantaneously transport the player to a platform within range. Various traps throughout the game are one-hit kill and the player needs to be looking at an object within teleport range to use the long teleport .

Get to the end and experience our unique reversible level that'll see you running for your life!

Feel free to let us know if there is anything you would like to see improved or added to game in the comments below.

One of the best platform games I ever played! I'm moderator of this game on Speedrun.com :D

Hi! I made an account on itch.io just to review this game. I have to say this is a lot of fun! I do think some things can be ironed out.

-Sometimes using your left-click blink ability on those slightly sloped bridges can glitch you into the bridge and I believe there isn't a way out. You just have to restart the level.

-There were also times I felt some paths you could take to the goal seemed too difficult and long to attempt. I.E. the lower path on the BOSS level.

-Maybe different music for when you summon the boss?

-Maybe when your character dies his hands should fall down off screen rather than just move like he's running?

I enjoyed it nonetheless and believe the boss was pretty great. Don't really understand why people said the boss was challenging or didn't know what to do. It did take me a few tries but obviously you're just running back to the beginning. Lol. I guess people need tutorials left and right. Great game! Reminds me a lot of A Story About My Uncle

That's awesome, we really appreciate you taking the time to make an account and give us feedback!  We are aware there are a few bugs here and there that need ironing out mostly due to the time restraints and other university deadlines we had but we are looking to perhaps fix a few over the summer holidays.  Thanks again for playing!

As expected. I don't go into indie games expecting them to start out flawlessly. But your team is clearly talented. I know you all will be successful! Good luck!

Although I couldn't figure out how to beat the final boss I still enjoyed myself.

Hey, thanks for playing! There is a video on our website of the final boss if you're curious, but we're all really glad you enjoyed it nonetheless!

No problem. Though I couldn't get past the boss just playing the game and getting through it was both challenging and enjoyable. I just can't say I don't like it.

With traversal mechanics reminiscent of the Dishonored Blink teleport and an Overwatch Tracer dash a speedwiggle is only the beginning!

In essence the only thing that would improve this game for me in the world of speedrunning is a procedurally generated island map.

Otherwise playing Zephyr feels like you're speedrunning on cloud 9

Great work here team! There were a few points that were a little weird to figure out on your own, like not being able to move through the traps using the powers and I think (what seems to be) the last level could use a checkpoint halfway through, or a division into two levels. But all the minor issues in here are completely forgivable considering the time and resource constraints that plague student work. Really well done!

Hey, thanks for the feedback, we really appreciate you taking the time to check out our game!

So there's no in-depth story to this game but there is an overarching one. Playing as the hero you travel across islands in the sky, each string of islands leading you to an artifact piece with the goal of assembling the entire thing.

Though there is no real story exploration beyond what you are presented, the world and the concept that the team have created gives the game an excellent feel left me wanting to know more about the world Zephyr is set in.

The hero isn't given a name in-game so I was sort of left wondering if Zephyr was the name of the world if it was the hero's name, not a big deal in a small game of course.

The graphics are simple but very neat and well done. There were no graphical errors in the game which is pleasant since I've played similar games before where I've been able to see inside my own arms or triple-a titles where parts of the world disappear.

The artwork is great and helps to create a feeling of awe and solitude in as you race your way through long abandoned islands in the sky.

The core of Zephyr is the gameplay as it is with any speed-run style game. The mechanics are simple and straightforward, though there is a tutorial offered on the menu, the controls and mechanics are so intuitive that I'd be surprised if anyone couldn't figure out how to operate the game within a few seconds of the the first level.

The level design starts off very easy and forgiving, but quickly escalates into more difficult and I daresay frustrating layouts and designs. When I say frustrating of course I don't knock the game, simply my own failure to complete a basic jump resulting in a restart the followed by the same failure again. The game is fast paced enough that dying over and over isn't really a set back, though at one point when I made a mistake right at the end of the final level I wished there were checkpoints, I think the levels aren't long enough to actually warrant this.

The introduction of traps and the possibility to take multiple routes to your goal through use of your abilities and a willingness to die for experiments your presents you with opportunities to shave down your run-times. It also allows for multiple runs and increases the replayability of the game.

When I had watched a video of the game I was bothered by the arm movement as I felt it looked a great deal like a man doing an impression of a train. However, when actually playing the game myself I found that the gameplay was engaging enough that I either didn't notice the arm movement at all. It might be that watching someone else play it removed me from the more important aspects of the game.

My only real gripe with the game was when I used the teleport ability I would sometimes find that I wasn't close enough to reach anything, after the slow-down times out if I used the teleport again the slow-down wouldn't activate and I would quickly plunge to my death. There may have been an intentional cool-down on the time slow to stop people abusing the feature, but if there was I didn't know about it - perhaps it was explained in the tutorial I skipped.

When taking into consideration that the development team are students with busy schedules who are learning as they create, I would give the game a solid 4/5. The game was smooth and had no bugs and would definitely serve as an excellent time-killer if I had 10-15 minutes to wait for something.

I very much enjoyed the game even if it was a bit short.

Dude, this is a great review.

This is really helpful, thanks for your feedback! 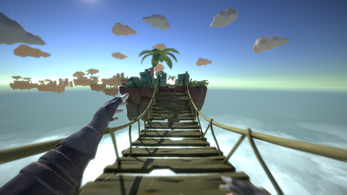 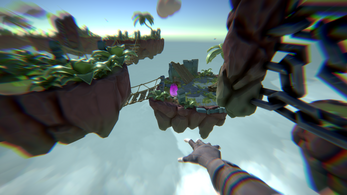 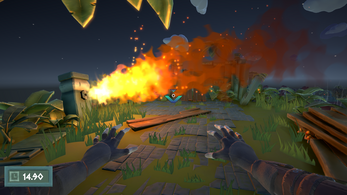 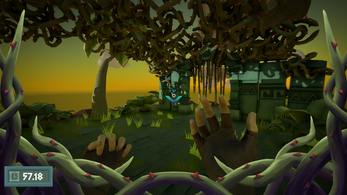 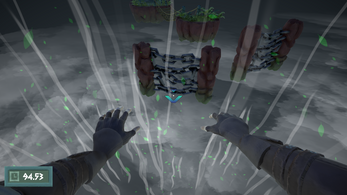